Buried at Stonham Aspal Church: Percy Studd, son of Samuel William and Annie Laura Studd of Church Farm. He was injured in early 1918. His mother received the news that he had died on 28 March 1918, but refused to believe it, and when to Coulter Hospital in London, and remained with him until he died on 15 April 1918 aged 20. 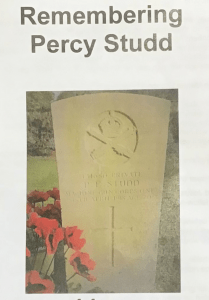